We’re working hard to ensure that Google Sheets meets your business needs. As part of that effort, today we’re introducing several enterprise-friendly features that you’ve been asking for in Sheets on the web, Android, and iOS:

Rotated text
You can now rotate the text in a cell in Sheets (Format > Text rotation). This is especially useful when you need to fit long header names into thin columns, or when you simply want to fit more text on a single screen. 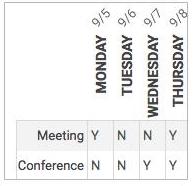 Accounting number formats
We’re making it easier to read your budgets, expense reports, and other spreadsheets containing monetary amounts by aligning the currency symbols within them (Format > Number > Accounting). We’re also making improvements to the way numbers, decimal points, and repeated characters line up to make them simpler to scan and analyze.

Additional improvements on mobile
In addition to the features described above, we’re also launching the following improvements to our mobile apps:


For more details, check out the Help Center articles below.

Launching to Rapid release, with Scheduled release coming on March 6, 2017